Giving your daughter away on her wedding day is no simple task. You are entrusting another man to join forces with the Lord to watch over her, care for her, and love her the way you do. It requires a tremendous amount of selflessness to put the needs of another person above your own.  But trust in the Lord and you will prevail. You will make it through her wedding day with strength and a renewed sense of faith.

This is one of the most touching wedding speeches we’ve ever come across. We hope it grants all fathers out there, the faith and courage to make it through the wedding day with a smile in their hearts.

Sit back with a cup of your favorite hot beverage, and join us for an interview with April’s featured Christian artist and Modern Inspired Design shop owner, Sarah Tena.  Sarah has taken time out of her busy schedule to design 5 inspired Christian printables, exclusively available through Pray the Lord Ministries!

Can you tell us a bit about yourself?
My name is Sarah and I’m a mixed-media artist. I have a BA in Graphic Design and Theater Art. I also went to Silversmith/Jewelry school.
I love to create and design…basically…EVERYTHING.

I’m Christian so, naturally, I wanted to design creations that would spread the Good News of the Gospel

What is your favorite artistic medium?
Hmmm… I’m a mixed media artist so hard to pick favorite…it depends on what I’m inspired to work with at the time. If I had to pick…Maybe, just a pen/marker and paper to draw ideas on. That is the most consistent thing I use.

When did you first start creating art in HIS name?
I have been coming up with ideas pretty much since after I was saved. So…about six years ago. Didn’t start selling/listing them until April 2012 in my Etsy Shop.

What drew you to it?
Good Question. It was just a STRONG desire I had for such a long time and would make designs on my spare time. Then, I prayed a lot about it and felt led to spend more
time on it.

How do you choose the scriptures for your art?
Most of the time they are scriptures that mean a lot to me personally. Whether they are ministering to me at that particular time or they capture my attention for some reason.

What is your favorite scripture? Why?
Matt. 6:33. Anyone who knows me knows that one. I post it everywhere!It’s pretty simple why it’s my favorite… it reminds me of what my focus
should be on at all times!

What is your greatest obstacle when creating, and how do you overcome it?
My greatest obstacle is time. So many ideas but soooo little time. I dont really overcome it… I just have learned to deal with the fact that life happens (aka. distractions arise) and I trust that I would be lead to do what is most important. I work on the ideas that keep repeating themselves or that I have a strong desire to create.

How much of your art is based on personal life experience? Can you give an example or two?
A lot of it! A lot of the scriptures and inspirations have a strong personal meaning. Usually, you can tell by my descriptions about what a particular piece means to me.
For Example, Nothing will be impossible with God Bible Pendant. The story is in the listing

Another Example is the Customized Birthday and Spiritual Birthday Printable. I consider my spiritual birthday even more special than my actual birthday. The day it all started… the day that my life would change and never be the same…

What do you picture in your target audience? To whom do you cater?
My target audience is a Christian who is in love with modern and minimalistic design.

What is your favorite piece?
My favorite changes… Right now… I would say…My Christian Cross Silhouette.
I made a Pendant from that design which I wear a lot. It reminds me of the love that Jesus had for all of us.

Do you have any personal heroes?
Other than Jesus, I would say my boyfriend. He points me closer to God and His encouragement and support means so much! 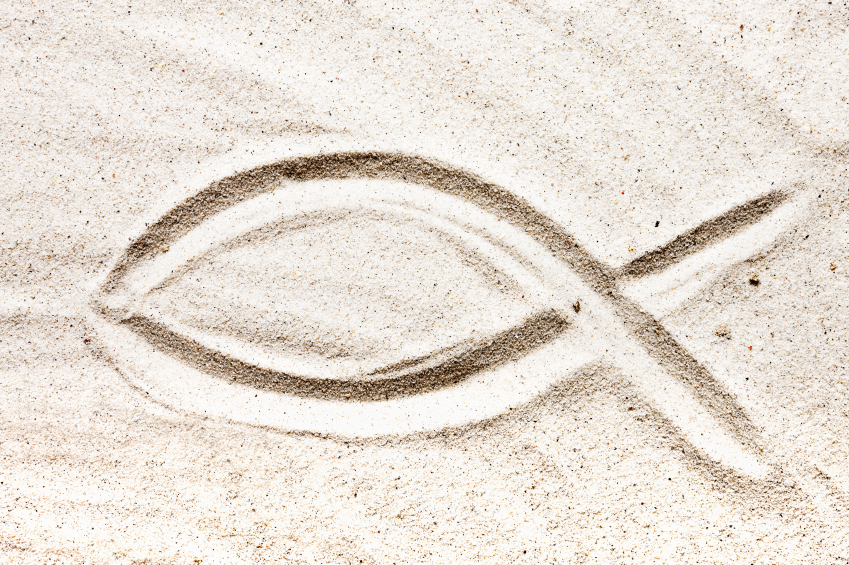 As Jesus walked beside the Sea of Galilee, he saw Simon and his brother Andrew casting a net into the lake, for they were fishermen. Come, follow me,” Jesus said, “and I will send you out to fish for people.”
At once they left their nets and followed him. Mark 1:16-18 (NIV)

The Jesus Fish (also known as Christian Fish) is a common sight on bumper stickers, t-shirts, jewelry, and other Christian themed merchandise across the globe. But what is its significance? When was it first used?

Many people would be surprised to learn that the Jesus Fish symbol’s origins actually predate Christianity.  In fact, the symbol, which the Romans called the vesica piscis, has more ancient roots.  It’s various uses by pagan sects can be traced as far back as 5000 BCE.

So when did the Jesus Fish first appear?

The symbol is believed to have first appeared amongst Christian sects in Alexandria, Egypt around the first century of the Common Era.  There is no certain answer as to why early Christians adopted the vesica piscis as a symbol of their faith, but a popular theory is that choosing a well-known symbol allowed their activities to pass unnoticed during times of increased persecution.

Regardless of why they chose this symbol, an extraordinary aspect of Jesus Fish symbol lies in the fact that is the subject of a clever acrostic, or word game, first documented in a set of religious texts called Sibylline Oracles, sometime around the 6th Century.

If you take the first letters, syllables, or words of a common, but specific Christian declaration, and place them together, they spell out an entirely different message. For example:

The phrase: Jesus Christ, Son of God, Savior, in the original Greek was:

When you take the first letters of the original Greek phrase, or the Latinized version of the letters, you get:

How was the Jesus Fish used?

As early Christians faced increased persecution, they needed a silent way to communicate to others that they were Christian.  To communicate, one person would draw the top part of the Jesus Fish in the earth:

If the intended recipient of the message was able to draw the second part of the fish, both parties knew they were safe.

The symbol was used to mark secret meeting places, as well graves of Christians buried in Roman catacombs. It could often be seen marking houses of believers, a sign of sanctuary to other Christians.

The next time you happen upon the symbol of a Jesus Fish, think fondly on the brilliant early Christians, who found their way to God, regardless of the perils involved.

Source: A variation on the Classic Children’s Bedtime tale by Joseph Addison in an essay appearing in The Spectator on March 8, 1711.

Websites linking to this page have chosen to adopt this generic privacy policy as their own. This means that they agree to abide by the principles laid out below.

Information that is gathered from visitors
In common with other websites, log files are stored on the web server saving details such as the visitor’s IP address, browser type, referring page and time of visit.

Where registration is required, the visitor’s email and a username will be stored on the server.

E-mail addresses will not be sold, rented or leased to 3rd parties.

E-mail may be sent to inform you of news of our services or offers by us or our affiliates.

Visitor Options
If you have subscribed to one of our services, you may unsubscribe by following the instructions which are included in e-mail that you receive.

Cookies
Cookies are small digital signature files that are stored by your web browser that allow your preferences to be recorded when visiting the website. Also they may be used to track your return visits to the website.

Google’s use of the DART cookie enables it to serve ads to visitors based on their visit to sites they visit on the Internet.